There was a time in Laura Hyman’s life, not too long ago, when she weighed over 250 pounds. She hit a low point when both her mother and mother-in-law passed away within a close amount of time of each other. Laura was a caregiver to both women and had been putting others in front of There was a time in Laura Hyman’s life, not too long ago, when she weighed over 250 pounds. She hit a low point when both her mother and mother-in-law passed away within a close amount of time of each other. Laura was a caregiver to both women and had been putting others in front of herself and her needs for years. The loss, combined with her and her husband Myron’s unhealthy lifestyles, caused Laura to step back and take a look at where their lives were headed. She knew that she had three daughters and four grandchildren to live for and decided it was time to take control of her health.

At that time, Laura and Myron were living in a retirement community, even though they were both only in their early 50s. Both of them were more than 100 pounds overweight.

“Our friend had these shakes, and I thought okay, we could try this,” Laura said.

So Laura and Myron purchased four paks, one for each of them, and one each for two of their daughters who were ready and willing to embark on a transformation with them. After one month on Isagenix, Laura and Myron went to an Isagenix University event, and it was there that Laura began to see the light.

“Just being at that event, I started knocking down walls and feeling better about myself,” she said.

The more she engrained herself in the Isagenix culture, the better Laura felt. She was releasing weight, going to events with Myron, and exercising regularly. Then she learned about the IsaBody Challenge® and decided to participate because she felt she had nothing to lose. She admits the $200 product voucher was a huge motivator.

At first, Laura’s first few Challenges were all about weight loss and became inspired by her teammate and 2016 IsaBody™ Grand Prize Winner Alvie Shepherd and his positive, can-do attitude.

“I started believing in myself watching Alvie,” she said. “You just knew he was going to do it, because of his belief.”

Last year marked the 10-year anniversary of the IsaBody Challenge, and to celebrate, IsaBody chose four random participants to attend the IsaBody Escape trip to Costa Rica. Laura’s husband, Myron, was chosen, and that trip was the final piece of motivation Laura needed to take her Challenge to the next level. “We got back, and we got a trainer in our community,” Laura said about returning from Costa Rica. “We have muscle now, and I’m weight training. I’m seeing the results. It’s such a gift.”

Through multiple IsaBody Challenges, Laura and Myron have each released over 100 pounds,* and both have been inducted into the 100-Pound Club. Once she lost the weight, she began to focus on building lean muscle and getting stronger. A product of the product, Laura embodies all things Isagenix, drinking IsaLean® Shakes daily as well as implementing the AMPED™ line into her exercise program.

There were a few times when Laura experienced a weight loss plateau. To overcome that, she went back to basics and began a 30-Day System, but other than that, she says her IsaBody journey has been fairly free of obstacles.

“I haven’t had a lot of obstacles these days because I only focus on the good right now,” Laura said. “That’s something I never knew how to do before.” One way Laura focuses on the good is by traveling the country with Myron in their RV, visiting family and friends and sharing Isagenix. Because they pursued the business opportunity together, they are able to build their business while spending quality time with family, especially their grandchildren. As an active member of the Prime Time movement, Laura and Myron cherish time with their family, something that means a lot to them as baby boomers. She also focuses on having fun with her workouts, both her and Myron pushing each other to go further in their workouts.

“Myron and I have always said, when it’s not fun, that’s when we stop,” Laura shared. “Because life’s too short. We’re just going to have fun from here on out!” 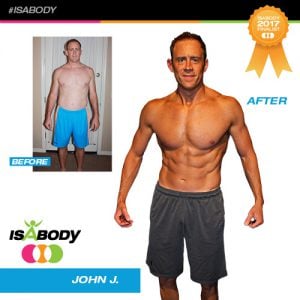 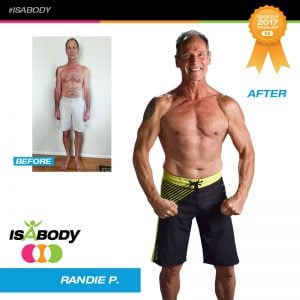